For many people, Spain is synonymous with bullfighting. This spectacle apparently started centuries ago as part of a religious ceremony where Iberian tribes would sacrifice them for luck and respect. During the Middle Ages, Greeks and Roman aristocrats used to fight the bulls on horseback. Then, in the 18th century, poorer populations began fighting the bulls on foot as part of the spectacle. Although much time has passed since the origin of bullfights, many traditions and customs remain to this day. The most well-known bullfighting and “running with the bulls” occurs in July in Pamplona, Navarra as part of the San Fermín festival at the beginning of July. On the other hand, many people oppose this tradition, as it is outdated and abusive towards the bulls. Bullfighting is a controversial Spanish ritual that has taken on political significance and challenges many to think before running with the bulls.

San Fermín is a festival that starts at noon on July 6th at Plaza Consistorial in Pamplona. Hundreds of people gather in the plaza with their red bandanas and giant inflatable balls that soar above the crowd. At noon, a firework is lit and the celebrations start. The party goes until July 14th at midnight and everyone sings “Pobre de Mí” while fireworks close out the festival.  San Fermín festival takes place to celebrate the Spanish tradition of bullfighting as well as to honor Saint Fermin, one of the patron saints of Navarre. This festival and running with the bulls in general draws many foreigners to Pamplona partly from gaining literary attention through Hemingway’s “The Sun Also Rises.”

Running of the Bulls 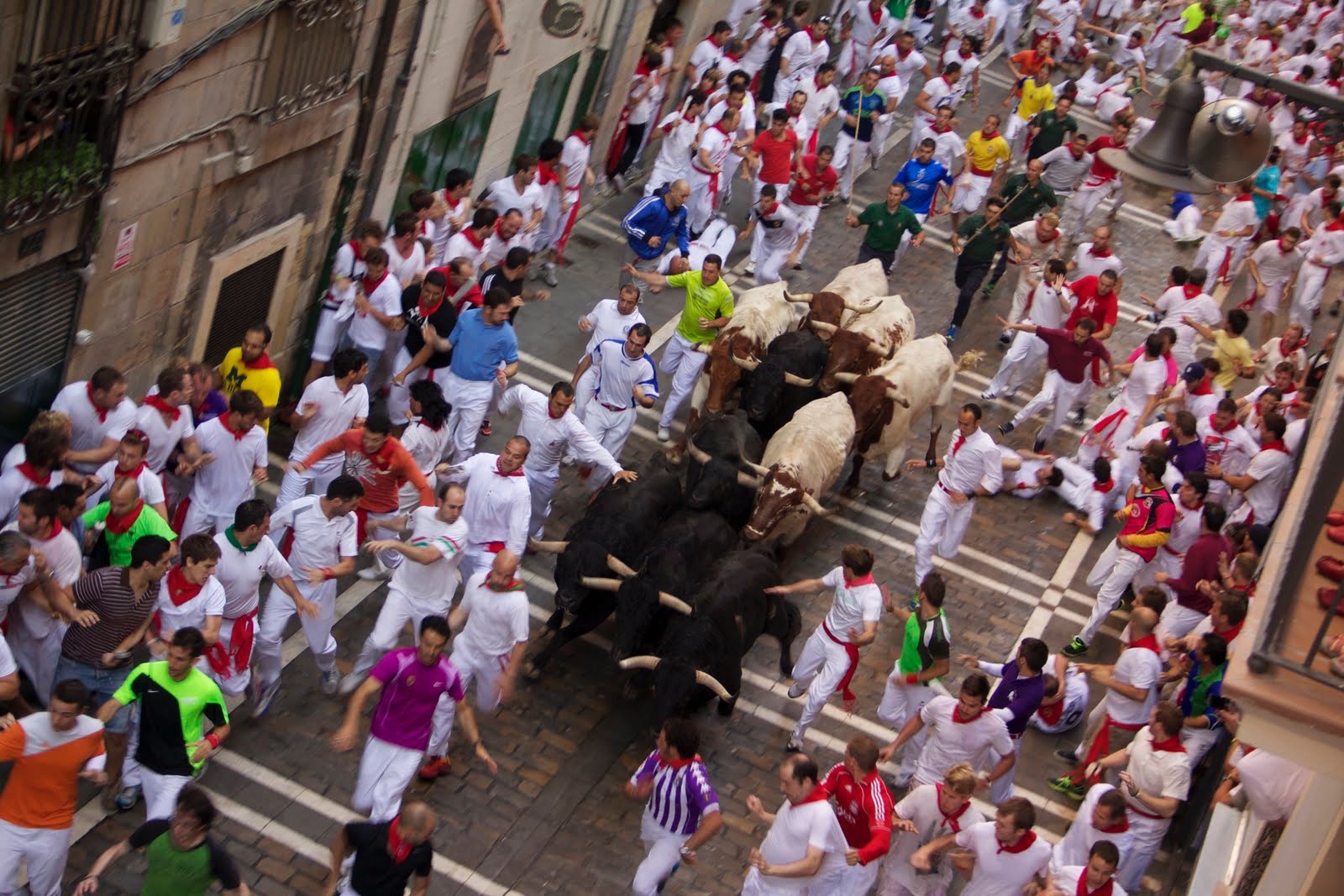 The most important part of the modern day San Fermín festival is el encierro de los toros, or running of the bulls. This tradition takes place every morning at 8am, and the purpose is to transport the bulls from the fields to the bullring. Back in the day, when transporting the bulls through the streets, men would try to rush the process by scaring or angering the bulls so they would move faster. Over time, more people started running with the bulls to get them to the ring, and now the run itself is popular tradition. Brave foreigners and locals alike head to the streets clad in white clothing with a red scarf around their waist and a red handkerchief around their neck. To run with the bulls, you must be 18 years old or older, sober, and you cannot record the run. It takes about three minutes to do the whole thing, and the race finishes in the bullring, where the crowd converges and the bulls are put into their pens until the bullfight takes places later that afternoon.

During San Fermín in Pamplona, or in other cities like Madrid, commonly on Sunday afternoon from Spring to Fall, you can watch bullfights from the giant arena. According to tradition, there are three bullfighters (matadors) that have to kill two bulls each, starting with the most senior fighter and alternating people each bull. The spectacle is very strict and participants have to abide by certain rules as well to keep everything controlled.

Although banned in some Spanish cities (and all of Catalonia) because of the controversial customs, bullfighting remains a popular part of Spanish culture. Many animal rights activists call for the ending of bullfighting because of the brutality, while others believe it is a cultural spectacle that can’t be changed. In today’s society as well, certain political parties support bullfighting while others oppose it. It is hard to say whether the killing of the bull is justified as tradition or unfair to its life because it is killed for fun. Additionally, while matadors are supposed to kill the bulls quickly to prevent suffering, the crowds and emotional stress these animals face while in the arena are seen as suffering to many.

So, if you want to experience Spanish culture and don’t mind seeing the bullfights, the city of Pamplona during San Fermín is spectacular. Even if you don’t run with the bulls, the city is quite lively and Spanish culture is evident everywhere. Although San Fermín and running with the bulls takes place in other parts of Spain and Portugal, the most impressive one is in Pamplona. Send us your request now and see you next July!

This site uses cookies. By continuing to browse the site, you are agreeing to our use of cookies.

We may request cookies to be set on your device. We use cookies to let us know when you visit our websites, how you interact with us, to enrich your user experience, and to customize your relationship with our website.

Click on the different category headings to find out more. You can also change some of your preferences. Note that blocking some types of cookies may impact your experience on our websites and the services we are able to offer.

These cookies are strictly necessary to provide you with services available through our website and to use some of its features.

Because these cookies are strictly necessary to deliver the website, you cannot refuse them without impacting how our site functions. You can block or delete them by changing your browser settings and force blocking all cookies on this website.

These cookies collect information that is used either in aggregate form to help us understand how our website is being used or how effective our marketing campaigns are, or to help us customize our website and application for you in order to enhance your experience.

If you do not want that we track your visist to our site you can disable tracking in your browser here:

We also use different external services like Google Webfonts, Google Maps and external Video providers. Since these providers may collect personal data like your IP address we allow you to block them here. Please be aware that this might heavily reduce the functionality and appearance of our site. Changes will take effect once you reload the page.